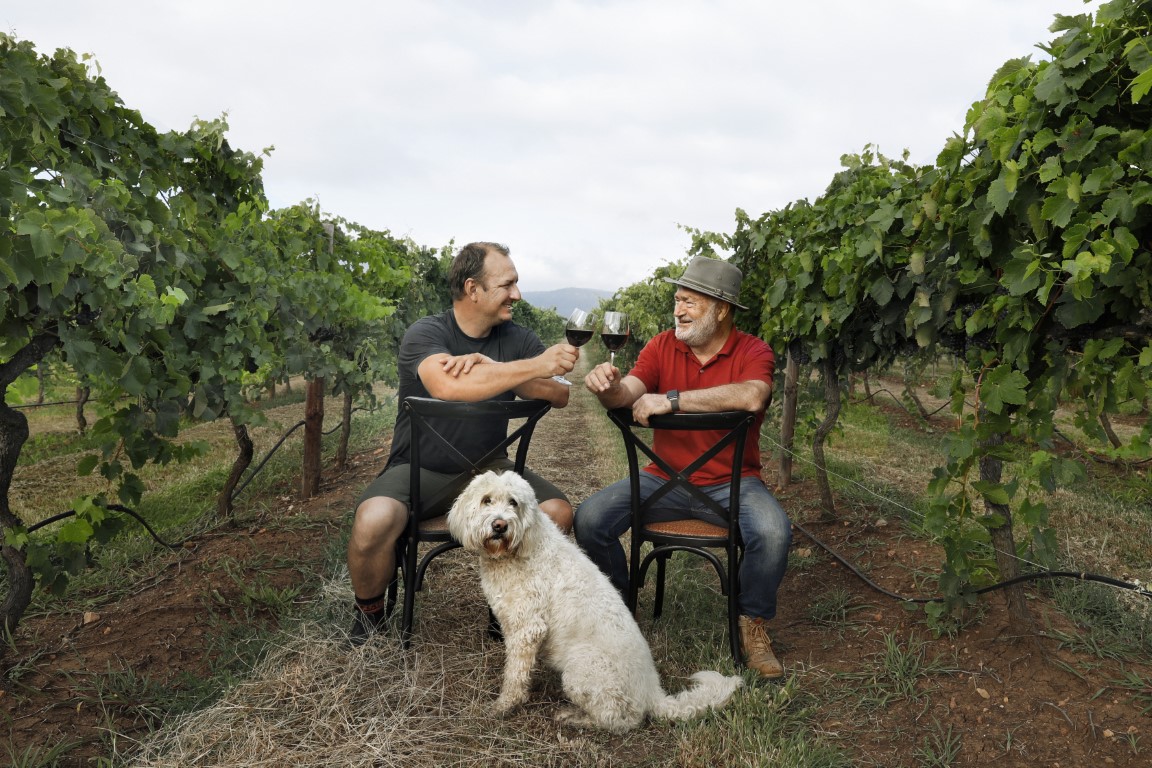 April 13, 2022Around the Vineyard, Our Achievements, Our NewsDe Iuliis Wines

THE De Iuliis 1988 vinous foray began with them selling their grapes to established wineries, then having own-brand bottlings made by contract winemakers and ultimately in 2002 production in a multimillion-dollar 1616 Broke Road, Pokolbin, complex. That high-tech winery, tasting rooms and sales area was built on a then-bistro and art gallery site and today processes the grapes from three fine vineyards.

Involving three generations, De Iuliis has emerged as a top-rank Halliday Wine Companion five red star brand with wines of “the highest echelon”. Key players are founder Joss De Iuliis and his son winemaker-CEO Mike who this month are toasting the 20th anniversary of the first vintage out of their winery.

A highlight will be chef Michael Elfwing’s Saturday, April 23, five-course luncheon at Spicer’s Guesthouse at Ekerts Road, Pokolbin. Mike will match the food with new single vineyard and limited release wines and wines from the exceptional 2017, 2018 and 2019 vintages and 2009 and 2004 museum wines.

The genesis of De Iuliis Wines was Joss’s young memories of his family’s winegrowing in their native Italy.

In the late 1950s at the age of 35, Joss’s father Celeste left his wife Maria and sons Joss and Don at home in central Italy’s Abruzzi area and landed in Newcastle to jobs at BHP Steelworks and De Martin Co. Gaining a love of Aussie life, in 1960 he brought Maria, Joss and Don to join him. Joss has vivid memories of starting school at Mayfield West Primary as a 10-year-old speaking no English. Quickly learning the lingo, he progressed from Newcastle Junior High to the fitting and turning trade then in 1973 to a five-year stint as manager of a Broadmeadow engineering firm.

In 1980 Joss bought Waratah Engineering Co and made it the mainspring of a $50 million business that required him to drive through the Hunter vineyards to visit mining industry clients. That aroused a dream of having his own vineyard, something that came to life in 1988 when he bought land in Lovedale Road, Keinbah, which was planted into a fine 20-hectare vineyard by family members, including patriarch Celeste and matriarch Maria, and 12-year-old schoolboy Mike.

That gave Mike an ambition to become a winemaker – an aim accomplished in 1999 with an Adelaide University degree in oenology followed by acclaim as one of the nation’s brightest new generation winemakers and show judges, a Len Evans Tutorial scholarship and a 2015 Hunter Winemaker of the Year award.

THIS beautifully mature De Iuliis 2017 Aged Release Single Vineyard Semillon is straw-hued and has scents of jasmine and new-mown hay followed up by elegant lemon flavour. The middle palate shows green apple, kiwifruit, flint and toast and honey characters and a finish of steely acid. At dewine.com.au and the Broke Rd cellar door. PRICE: $45. DRINK WITH: Hiramasa kingfish. AGEING: 12 years. RATING: 5.5 STARS (out of 6)

FROM a vineyard that made the fine Lindeman’s Steven shiraz reds of the 1970s, 1980s and 1990s, the De Iuliis 2019 Steven Vineyard Shiraz has 13.5% alcohol and is bright garnet, cassis-scented and intense plum front-palate flavoured. The middle displays ripe cherry, spice, mint chocolate and savoury oak and the finish has earthy tannins. PRICE: $40. DRINK WITH: roast pork. AGEING: 10 years. RATING: 5 STARS

You can read the entire article by John Lewis here.