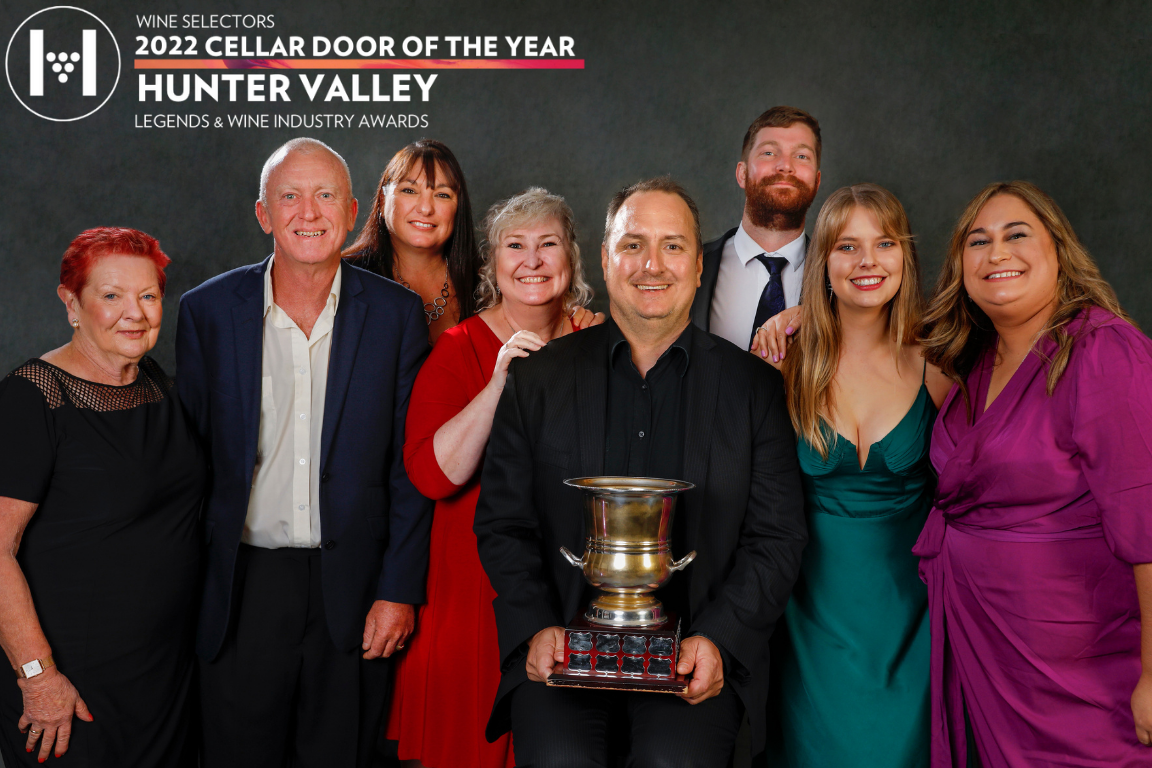 The Shout: Legends of the Hunter Valley celebrates the region’s wine stars

May 23, 2022Our Achievements, Our Cellar Door, Our NewsDe Iuliis Wines

Accepting the latter award, General Manager of Spicers, Mark Whitnell, paid homage to the staff at the restaurant.

“We have a wonderful team out there and it’s such a privilege to be involved in the awards. It’s a great privilege to represent Hunter Valley wines.”

These categories formed part of the largest ever Legends of the Hunter Awards, with four new prizes.

Another tourism sector title went to De Iuliis wines, which secured the 2022 Cellar Door of the Year Award.

Accepting the award with her team, De Iuliis Cellar Door Sales and Marketing Manager Jenna-Rose Vaughan acknowledged all the other cellar door operators in the Hunter, who had endured a difficult two years during the pandemic.

“We actually wanted to dedicate this to every Cellar door person out there. It’s been a really tough year with masks, taking down details, and no matter what happened, the whole Hunter Valley has shown through with a smile, so thank you everyone.”

Vaughan spoke to The Shout and expressed her delight in winning amongst such a strong field of nominees.

“It was such a high quality of nominations this year, and it was an absolute joy to win,” Vaughan said.

The Cellar Door award is a particularly tough contest – as it is mystery shopped, with the winery’s bricks and mortar location, phone call professionalism and online presence assessed. De Iuliis received a score of 95 per cent.

“We love to focus, not only on our exceptional wine and our story, but to also highlight the Hunter Valley as a premium wine region, with a really rich history and exceptional quality wine,” Vaughan added.

Vaughan also looked ahead to 2028, earmarked as the Hunter’s 200th anniversary, when the whole region will collaborate on a range of events, festivals and celebrations.

“We’ve never had phylloxera here in the Hunter, so we’ve also got some of the oldest surviving wines in the whole world – and that’s very unique.”

When asked what the future might hold for the Hunter, Vaughan commented that, “the most important thing is sustainability.”

“It’s not just a buzzword that you throw around, because it’s really important for farming, and winemaking and grape growing is all about farming conditions,” Vaughan continued.

Vaughan’s words were echoed by winemaker Mike de Iuliis, who told The Shout: “Sustainability from my point of view is going to be paramount.”

“We have an obligation to sustainably manage those properties, so obviously they’re there for the next year and for future generations.”

Mike was also delighted by his Cellar Door team’s win and was quick to put the credit on the operating staff.

“My days in the cellar door are pretty minimal, but the guys really do put in the work,” Mike said.

Reflecting on the awards as a whole, Mike de Iuliis was glad to see an expanded program of tourism categories.

“But it’s so important to acknowledge those people that wouldn’t normally be acknowledged – the best accommodation and the viticultural side of things.”

Reflecting on the awards in general, Scarborough said: “These awards are very important. We need to recognise people’s hard work.”

Like Vaughan and Mike de Iuliis, Scarborough expressed the importance of sustainability for the on-going health of the Hunter Region and was excited to be honoured for his work in this area.

“What we do in the vineyard, looking at sustainable grape growing, and changing the traditions of what’s been done in the local area – it’s always nice when the changes you’re making in the vineyard are recognised,” Scarborough concluded.

– HVWTA Tourism Operator of the Year: Beyond Ballooning