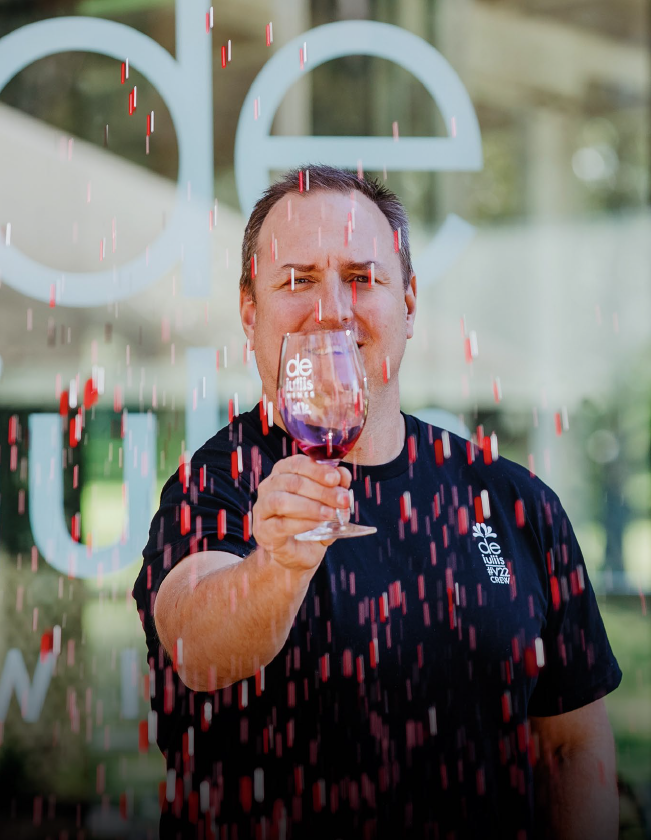 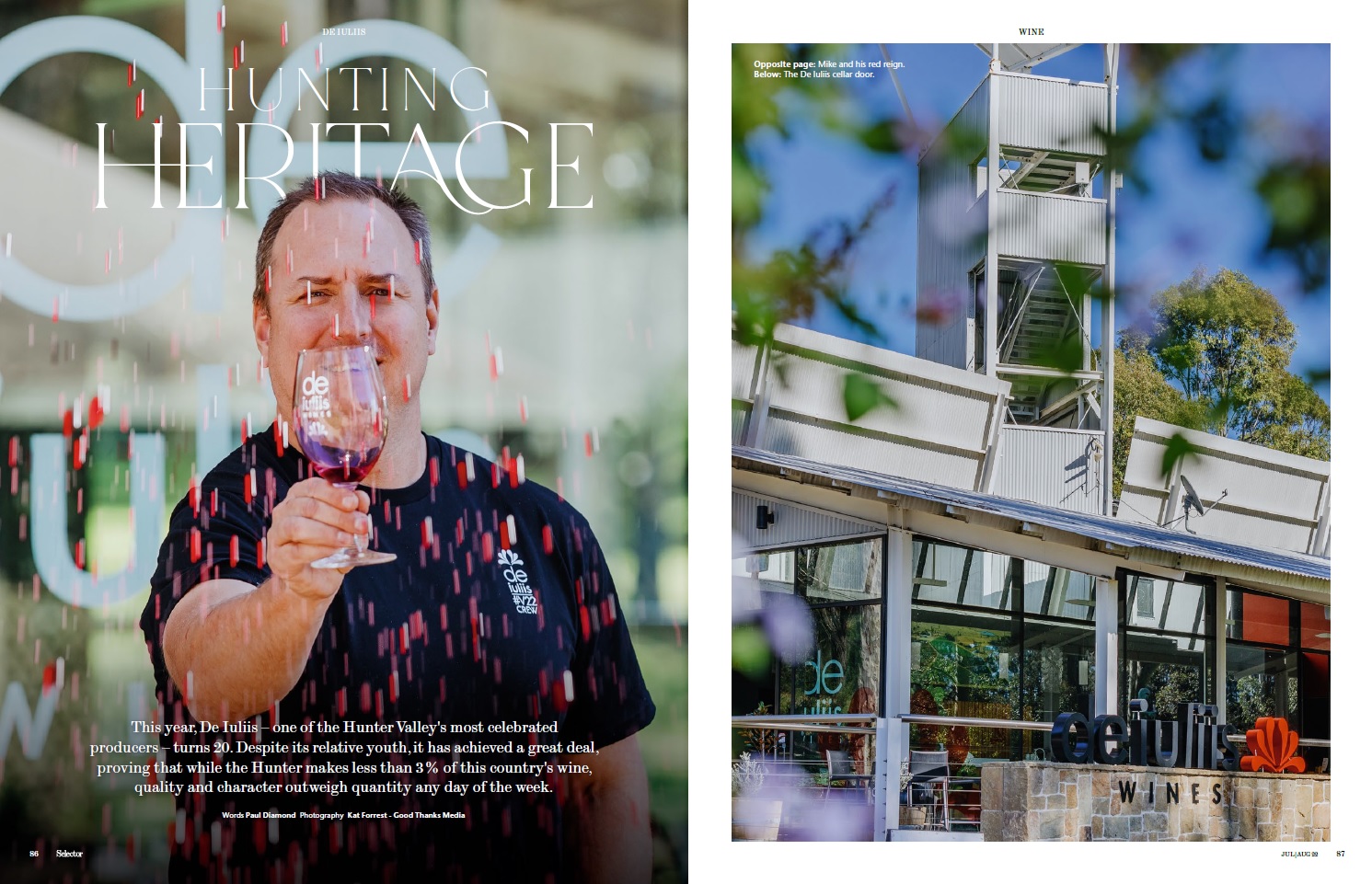 This year, De Iuliis – one of the Hunter Valley’s most celebrated producers – turns 20. Despite its relative youth, it has achieved a great deal, proving that while the Hunter makers less than 3% of this country’s wine, quality and character outweigh quantity any day of the week.

Wine is a living chemical symphony that requires a special set of skills to get grape from vine and into bottle. You need a sharp palate, a solid understanding of chemistry, microbiology and a working knowledge of botany, geology, meterology, plant physiology.

You need to be part mechanic, part electrician and part plumber to be able to fix all the stuff that gets broken along the way, and then also to be able to project manage, oversee people, and sell. Oh, and you need to be able to drive a forklift.
Skills, however, are not enough. Good wine takes time, hard work, money… and just enough love for what you’re doing so that you aren’t overwhelmed daily by it all.

Mike De Iuliis, winemaker and owner of the Hunter Valley’s De Iuliis Wines, clearly loves what he does. His happy, cheeky demeanour sees him well-liked by his local peers and the broader wine community. He’s got a good palate and gives his time regularly to the Australian wine judging circuit. His wine trophies would take a few pages to list, he has been awarded Hunter’s Winemaker of the Year, and his cellar door was recently voted best in the region.

If you have been to the De Iuliis winery and cellar door, snuggled into the base of the Brokenback Range on Broke Road, you would know that it’s rare not to see him wearing a grin, making self-effacing jokes about himself or telling a humorous tale.
Yet, despite the projection of a casual and carefree knock-about bloke, Mike’s wines are very good, and when you taste his wares it’s clear he takes what he does very seriously. His wines are detailed and nuanced, and if you look at them over time you can see that there is thought and focus in them that extends beyond the challenges of each vintage.

But it almost didn’t happen, despite wine being part of his Italian heritage; Mike had no specific plans to make wine. “I wasn’t good at anything else at University other than drinking,” Mike recalls. “And ‘winemaking’ sounded like something ridiculous that you could tell your friends from school that you wanted to do.”

HERITAGE, HISTORY AND THE HUNTER

Wine is in De Iuliis’ DNA, with foundations stretching back four generations to the craggy slopes of central Italy’s Abruzzi region. Mike’s great-grandfather Donato had vines in his backyard and would take his son Joss across the mountains of Abruzzi on horseback to gather barrels of unprocessed Montepulciano, to take back to their village of Pescara.

Mike’s grandfather Celeste then migrated solo to Australia and landed in the Hunter, before starting work in the steel industry. Celeste was soon joined by his wife Maria and sons Joss and Don, and despite not speaking English the family thrived. Mike’s dad Joss became a fitter and turner and soon bought an engineering firm, later buying land in the Lovedale sub-district of the Hunter Valley wine region.

Joss is a collector and lover of wine, and after being inspired by what he saw and tasted around the Hunter, planted vineyards in 1990. He developed a passion for viticulture and soil regeneration, a factor that drives the wines of De Iuliis today.

For teenaged Mike De Iuliis, wine was a part of life, yet there was no initial drive to make a career of it. “I grew up at the beach,” Mike explained. “I remember wine being around at home and we would go up to the valley on weekends, but I had no connection to it another than that.”

“The whole country-agri lifestyle was a complete novelty to me. I wasn’t sold on wine till after my first vintage. It was with David Hook at Pothana, but after I did that first vintage I was sold. It was just the two of us; we worked 15 hour days, 7 days a week and everything was done by hand. I lost 15 kilos, drank lots of beer and was sold,” says Mike. “It just fitted me. Even though I went to university, I never saw myself as someone sitting in a lab or an office all day. I just love making, building stuff.”

Mike’s love for “making stuff” soon took hold, making good use of his Science degree from Macquarie Uni and his post graduate Oeneology qualification from South Australia’s revered Roseworthy College. And, as plans for the De Iuliis winery and cellar door began to materialise, Mike’s wines – and the family name – began to attract attention.

This trend grew and continues today, and the family name is now synonymous with the Hunter as a consistent producer of high quality, expressive wines that represent exceptional value. It’s no mean feat that in the short space of two decades, the De Iuliis name is up there with the leading names of the region, some of which are well over 100 years’ old. To get a detailed view as to how this was achieved, Mike treated Selector to a vertical tasting of three of his mainstay wines stretching all the way back to 2003.

Chardonnay is the Hunter’s white quiet achiever; always underrated, and often pushed aside by Semillon and its remarkable ability to magically transform, develop beautifully, and last for decades. But Chardonnay is a winemaker’s go-to white variety, and as such when it gets appropriate care and attention, it can be (and often is) fantastic.

Mike’s LR (Limited Release) is often a blend of the best barrels from the Joss’ Lovedale vines and the Stevens Pokolbin vineyard, that the family have sourced fruit from since 2005, leased since 2009, and now own. The wines are light on their feet and elegantly complex, delivering a balanced mix of pear, peach, and superfine limes. The palates show nuanced oak, a creamy texture and delicate aromatics of white flowers, stonefruits, creamy vanilla and beeswax.

All the way back to 2004, the wines are stylistically consistent, with the warmer years showing fleshier characters and subtle additions of funk and skins work showing up from 2014. The favourites were 2009 for its complexity, freshness and longevity; the 2014 for its elegant concentration; and the 2019 for its exotic aromatics, texture, clean lines and concentration.

Between jokes, innovation is something that Mike mentions regularly, and the wines that display this most are his single vineyard Shiraz Touriga.
The addition of other varieties to Shiraz is nothing new, but Mike was the first to do it in the Hunter and has had considerable success with it. First made in 2010 with fruit that comes from the Lovedale vines, these wines show classic Hunter Valley Shiraz characteristics, but with sweet and exotic additions to the aromatics – and a palate that is flat out delicious.

The blend is generally 80% Shiraz and 20% Touriga Nacional. The Shiraz delivers medium-bodied red and black cherries and blackberries, fine tannins and structure, while the Touriga brings sweet layers of black currants, plums, and an exotic potpourri of aromas.
Favourites were the 2013 for its length and concentration, the 2019 for its glossy and exotic mouthfeel, and the 2020 for its fine concentration and glossy finish. Again, these wines represented exceptional value and quality for the price ($40). This blending of a signature regional variety with a new world wine like Touriga impresses.

LIMITED RELEASE SHIRAZ
The LR (Limited Release) Shiraz is the De Iuliis flagship, and is Mike’s interpretation of one of the Hunter’s greatest assets. Made from a selection of the best barrels across a range of vineyards and released as an aged wine, these wines are classic, high-quality Hunter Shiraz with medium-weight frames, earth-driven savoury fruit lines, and fine-grained tannins that carry the length and the mouthfeel. They are built to last, as shown in the earlier wines of 2003, 2005 and 2006 – all were still very fresh, juicy and generous. The standouts were the mouth-watering elegance of the 2005; the 2014 for its concentration and vibrant energy; and the about-to-be-released 2019 for its elegant frame and exceptional layers of concentration.

A FUTURE BRIGHT
De Iuliis’ wines show what’s possible in a short period of time, and it’s clear that success will continue to follow this family’s journey. What does stand out however, particularly as some Hunter reds push well towards the $300 per bottle mark, is the notion that really good wine can be approachable and be delivered in a humble, hospitable manner.

“After 20 years, we’re in a good place,” reflects Mike on the rise of De Iuliis. “We’ve worked out that you need a balance between quality and price; and you need to find good people and let them get on with it so that you can focus on what you like and what you are good at. For me, believe it or not, that is dragging hoses around a winery.”